This week in Year 4 we had a fantastic time during our immersion day for our context for learning Blood, Bones and Gory bits, where we will be learning all about our bodies! On immersion day we all got to wear the thinking hats that we had created at home and took part in lots of different, exciting activities. We used the Habit of Mind, creating, imagining and innovating to create models of the organs we might find in our bodies, we also used this habit of mind to paint the body and organs. During the day we also took part in an investigation to find out if some scientific statements were true or false, we had to measure different parts of our body to the nearest cm to complete this job, we have found out that the length of our foot is the same length as our forearm! During the day we also had to label a human body with Welsh vocabulary and did lots of research about our bodies, we presented our findings using Google classrooms. This week we have also started a scientific investigation into the role of toothpaste. We wanted to find out how toothpaste helps to protect our teeth. We have discovered that the shell of an egg is very similar to the enamel on our teeth. We decided that we could coat one egg in toothpaste and investigate how well protected the shell becomes. We have 2 eggs, one has been coated in toothpaste and one hasn’t; we have covered them both in vinegar, an acid that we might eat, and left them for a few days. Next week, we will take the eggs out of the vinegar and investigate what has happened to the shells. We have predicted that the egg that has been covered in toothpaste will stay strong but the egg that didn’t have any protection will dissolve, just like if we never brushed out teeth they would become rotten. We are looking forward to finding out what has happened to our eggs!

This week in year 4 we have been developing our scientific skills as we investigated the big question “Is custard a liquid?” We started by carrying out a pre-investigation task, where we used the habit of mind, accessing prior learning, to build upon our understanding of the three states of matter. We found out information on the properties of solid, liquid and gas particles, but were also asked to think about the term ‘colloid’. Some children had to carry out research into what a colloid is, and we began to discover that a colloid is a substance that behaves like two different states of matter at certain times.

We use the habit of mind thinking flexibly to identify that while the custard looks and behaves like a liquid, it may also have similar properties to that of a colloid substance. Some groups sorted the properties of solids, liquids and gases into a tree map, and began to think about how the particles in a colloid might behave similarly to two of these states of matter at different times.

Finally, we ended our pre-investigation by following simple instructions to measure and mix our own colloid custard substance. We noticed that when stirred slowly, the custard moved freely like a liquid. However, when we stirred quickly, or stabbed the custard with the stirring stick, it became hard, as particles were energised and stuck together, causing it to behave like a solid. Some children also began to identify colloids in daily life, with examples like cream,

This week in year 4 we have been developing our computational thinking across the curriculum, as part of our context work. As we are learning about space exploration, we used the Just2Easy software on Hwb to program a rocket sprite using a specific algorithm.

Our first task was to think about the programming terms algorithm, bug, outcome and loop. We identified that an algorithm is a simple list of step-by-step instructions, used particularly when coding. Next we thought about how the outcome will affect the algorithm we use, and how we might use a loop or repeat function to help reach the outcome of our code. We used the example of an outcome ‘getting dressed’, in which our steps of waking up, having a shower, choosing items of clothing (socks, trousers, top) can be reordered/changed, but the purpose (outcome) of the code will always stay the same. We used our understanding of these key terms to begin to debug an existing piece of code.

Using the Habit of Mind striving for accuracy, we debugged the algorithm based upon an outcome to program the rocket to travel to all five planets before landing back on the moon. Once we had debugged the code, we used the software to reprogram the rocket sprite and test the new algorithm. Our final challenge was to create an algorithm to draw a simple 2D shape. 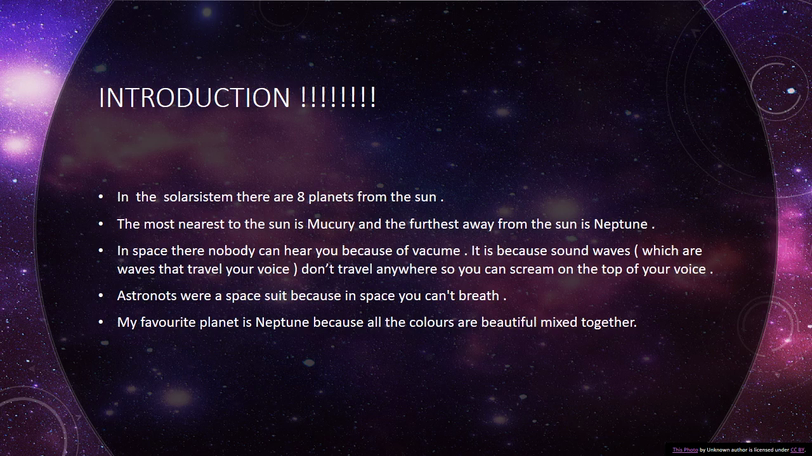 As part of our learning we have been finding out information about planets in our solar system.

We have been investigating how far sound travels

We have been investigating how smells get up our noses!

Visit to the Gudwara